These were the thoughts running through my head as I bumbled around the streets on my first lunchtime in Plovdiv. As my company has a large office there I visited the city for a week last month and, as I was finding on this now infamous lunch break, I was woefully out of my depth communication-wise.

I like many of us have grown up in an English speaking country – a kid of one of the spoilt nations that enjoys the luxury of other countries rushing to accommodate our language needs. I’ve also travelled widely learning Spanish and basic French and German so I don’t think I have ever been anywhere where I was completely incapable of making myself understood until this Bulgarian trip.

Entertainment during the Ryanair flight 😉

I flew into Plovdiv from London Stansted on an ever glorious Ryanair flight, landed late at night in foggy weather then crashed out straight away at my hotel (the Ramada Trimontium – think Grand Budapest but even more deserted). Walking into the office the next morning was my first real glimpse at this new country and I was really excited to explore! My morning was filled with meeting the teams and learning the layout of the new office. Everyone was incredibly warm and welcoming. When lunchtime came around several people invited me to join them but, as I was in the middle of a task, I naively declined saying I would pop out to get a sandwich later.

Wow, that was an error.

I knew I couldn’t speak Bulgarian and that, in the area near the office, it shouldn’t be expected for everyone to speak English however I hadn’t remotely anticipated just how hard it could be to make yourself understood when you don’t even share a common alphabet. After discarding a few sit-down restaurants and getting thoroughly confused in a cake shop (they had large pictures of sandwiches in the window but apparently only sold cheesecake… go figure) I found a large square with several food trucks, each bearing large pictures of the food they sold. Huzzah, I thought, I can just point to what I want! However even with this seemingly foolproof plan the server had to yell loudly at the queue until some kind Samaritan stepped forward and translated my order for me.

Needless to say, I made sure I had a lunch buddy every day after this.

After this bumpy start the rest of my week in Plovdiv was more or less wonderful. The team in that office are truly amazing – much like every other Bulgarian person I’ve met before or since they are warm and kind and will go out of their way to help you out. The weather continued to be a little grey and drizzly however this couldn’t dampen the spirit in this really fascinating city.

Making myself at home in our BG office.

One evening we went out for dinner at a local favourite, The Ale House. Now if you’re a beer fan this is the place for you, a restaurant with a beer tap at every table so you can pour your own plus amazing food including veal ribs, mustard mash, home-made crisps and, my favourite, cornflake chicken with yoghurt dip.

On my last day I managed to arrange to go into the office a little late so that I could take a few hours to check out the city centre before I left. Plovdiv is a really ancient city and so while it has many of the modern features you would expect to find anywhere else in Europe you will also find a gorgeous old town with cobbled streets and Roman ruins going back to the 1st Century. On my self-guided tour I walked around these areas with my favourite highlight being the stunning Roman amphitheatre, although the mosque in the city centre is also very impressive.

Friday night I was taking a late flight back to the UK but I did have time for one last Plovdiv special before heading for the plane: Happy Bar & Grill. Wow, this was an interesting one but right now I’m not sure if it was for good or bad. Happy is a Bulgarian chain, similar to a TGI Friday’s only with even more menu options If you were concerned about the lack of Anglo-American comforts you’ll find them all right here. The spinach fritters in this place do make it all worth it. I’d take several bags of them home if they’d let me!

All in all, Plovdiv was a wonderful surprise of an experience – I’m taking a phrase book next time though! 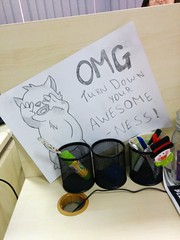 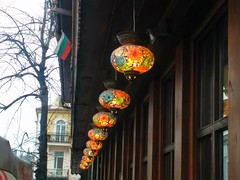 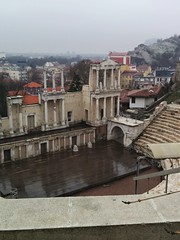 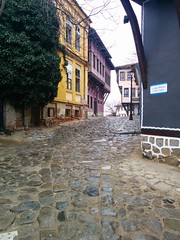 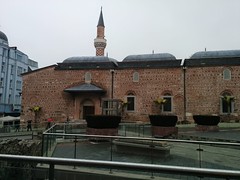 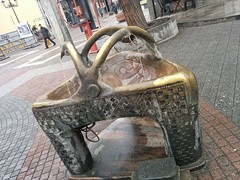 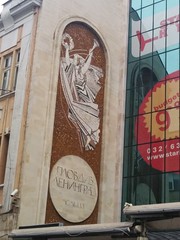 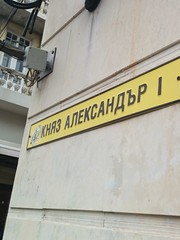 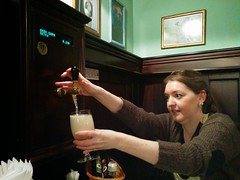 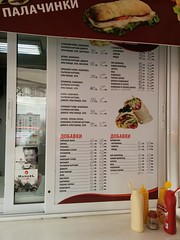 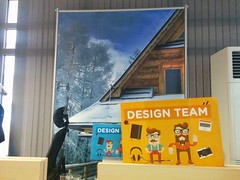 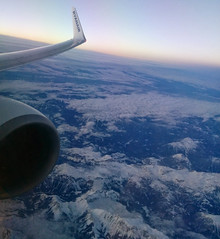 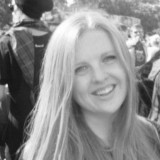