The Sky Garden at 20 Fenchurch Street

One of the perks – and sometimes the curse – of working on client sites is the variety of offices I get to visit.  At the moment I’m spending a lot of my time at 20 Fenchurch Street, more commonly known as the Walkie Talkie.

Throughout my career I’ve set my laptop down at desks in grotty old Victorian era buildings, eighties futurist monuments and ultra-modern skyscrapers. Sometimes I’m not even lucky enough to get a desk! Mentioning the Walkie Talkie does spark the odd ‘ooh’ from friends but – to sound a little jaded – modern London offices are still just offices. They’re mostly open plan, wall to wall desks and computers, lifts, breakout areas and windows looking on to other offices.

What is different here though is that at the top of the Walkie Talkie is the ‘Sky Garden’, a public space occupying the top floors and roof space of the building. You can visit off the street but you must either book in advance or book in one of the restaurants up there- there’s a bit of a waiting list on both at time of writing. However as a ‘tenant’ of the building I have the opportunity to book a trip pretty much as often as I’d like on a seemingly separate guest list. This does seem a bit odd. Though it’s started to get a bit busier, it is very quiet up there- this is no Shard or Empire State Building. Speculation abound as to why the numbers are limited.  Is it health and safety?  Cost?  Who knows.

For tenants once booked we can travel up to the 20th floor lobby which then lets us take the express elevator up to the 35th floor and the Sky Garden. This is a separate entrance and lift to that for the general public, which features an airport-style security screening, though it’s fairly relaxed and nothing as draconian as the papers are making out. Tenants have to use the public entrance at weekends as the 20th floor lobby is closed. Amusingly the public and tenant lifts are segregated using only the tiniest of signs. I’ve seen a few tourists emerge onto the 20th floor only to be harried back into the lift by security.

The signs opposite the lifts

There are probably two things that will be of note as you disembark from the lift: the shocking cold up there (it’s all glass and surprisingly no heating, bring a coat) and the pair of ladies at the entrance. These poor hosts are always ‘dolled up’, but currently shrouded in thick furs due to the aforementioned chilly weather. This theme continues to the bartenders, who seem to think they’re working at a ski lodge and appear totally casual in their gillets and bobble hats. The hosts will give you a quick overview of where to go if you’ve come up for a nose around, or direct you on to the correct restaurant if you have a reservation.

The arch and terrace

Passing by the hosts you come out on to the main vista overlooking London. An arched gallery looks south across London. The views of the Thames, the Tower of London, the Shard and other famous landmarks are quite impressive up here. The revolving doors lead out onto an empty terrace, however they appear firmly locked until later in the year, I imagine until the weather improves. This area also features the Sky Garden’s first eatery: the Sky Pod Bar.

This isn’t much more than a place to pay for overpriced paninis, a cup of tea and – if you’re feeling like lunchtime on a Monday is a good time to get loaded – a beer. I can’t over-emphasise how terrible this bar is. Perhaps the staff are still finding their feet but their service is shocking. Food and drink is served in an order presumably decided by lottery, the paninis are too much bread and not enough filling and the prices are befitting of most other London tourist trap canteens. The seating area is nice and currently bedecked in – I assume fake – furs.

Following around the rim of the building you walk up either side of the deck via a staircase parallel to the ‘garden’ components of the Sky Garden. I guess this will look better once it has grown in but Palm House at Kew Gardens this is not! My picture below does a great job of making it look more verdant that it is.

Heading up these stairs and round to the north side you take in very close views of the Cheese Grater, Gerkin and other amusingly monikered buildings, as well as play ‘spot the landmark’: to try and see if you can work out where Bank is, where your office is, where your house is (“that way, if you squint really, really hard”).

Tower 42, the Cheesegrater and the Gherkin. Clearly Tower 42 was on holiday when the tabloids were giving out nicknames.

Another flight of stairs will take you up to the other two sit down, reservation only restaurants. I haven’t had a chance to eat in them yet, so another visit is perhaps in order later in the year.

All in all it’s worth a visit as it’s free which compared to the Shard is well, no comparison! The Shard is taller but in a city not (yet) rammed with skyscrapers I’d imagine it doesn’t make a massive difference. Try to go near sunset if you can to get your snaps of the city at its potentially most beautiful.

I do think they’re missing a trick though, not allowing the general public up without bookings. One New Change, the Kensington Roof Gardens, The Heron Tower, they all have fantastic bars that serve vastly expensive drinks to the evening City crowd. Expand the bar and teach the staff how to pour a drink and perhaps it could be as rammed as other London bars on a Thursday or Friday night. Until then, it’s a thankfully quiet diversion for locals and tourists and worth a peek. 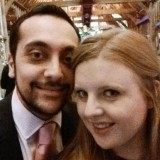